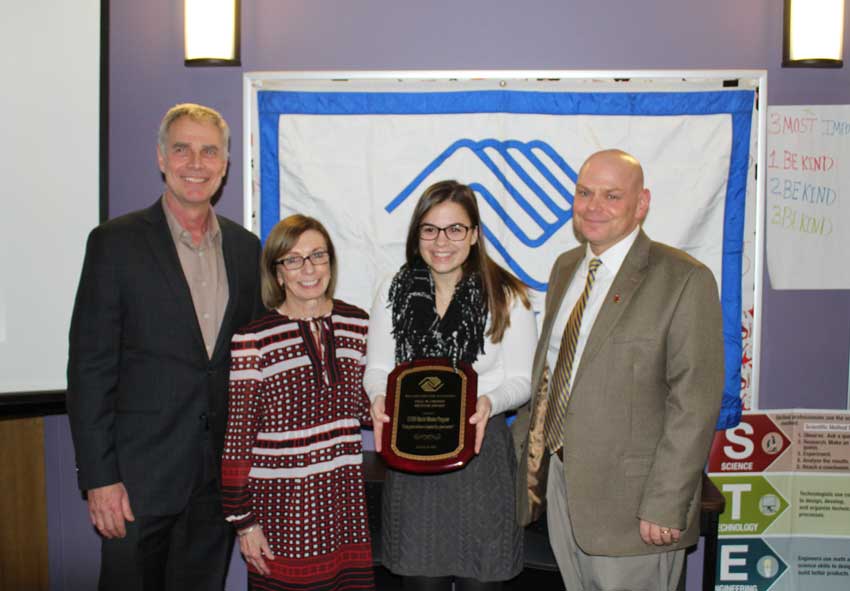 Central Catholic's Marist Mentors, a program started by students in 2010 to serve the children of Lawrence, was presented with the Paul W. Cronin Mentor Award for Volunteer Service by the Boys & Girls Club of Lawrence on Thursday, January 25.
The award is named in memory of U.S. Rep. Paul W. Cronin, a one-term 5th District Congressman and alumnus of Central Catholic, Class of 1955.
The award was presented in recognition of the contributions and long-standing commitment to the Club's youthful members at the Club’s Annual Awards Dinner on January 25.

Answering the Marist Call of Service

It was in 2010 at a Marist Brothers youth conference with hundreds of other students from Marist schools that Michelle Abou-Raad '12, then a Central Catholic High School sophomore, was challenged to carry the Marist call of service “to the least favored”  back to her hometown and develop a project that would make a difference in her community.

With assistance from the Central Catholic Campus Ministry staff and collaboration with the Boys & Girls Club of Lawrence, Michelle, along with Anya Housianitis '13, founded the Central Catholic Marist Mentors Program.
For the last eight years, and with many hundreds of inner-city children served at the Boys & Girls Club of Lawrence, Central Catholic’s students continue to commit time to volunteer weekly there as Marist Mentors to inner-city kids in grades three and up at the Boys & Girls Club of Lawrence.
Both Michelle, who now works in Washington, DC, and Anya, a senior at Clemson University, could not attend the Club’s award dinner, but each sent a video to the ceremonies speaking on the importance of the work of the Marist Mentors program and the life-changing role it continues to play in the lives of both the young mentees and CCHS’ student mentors.
Michelle Abou-Raad '12, Program Founder
Anya Housianitis '13,  Marist Mentor

Tyngsboro resident, Stella Gollihur '18, a senior at Central Catholic, coordinates the Marist Mentors program presently and has herself been a Marist Mentor since her freshman year. 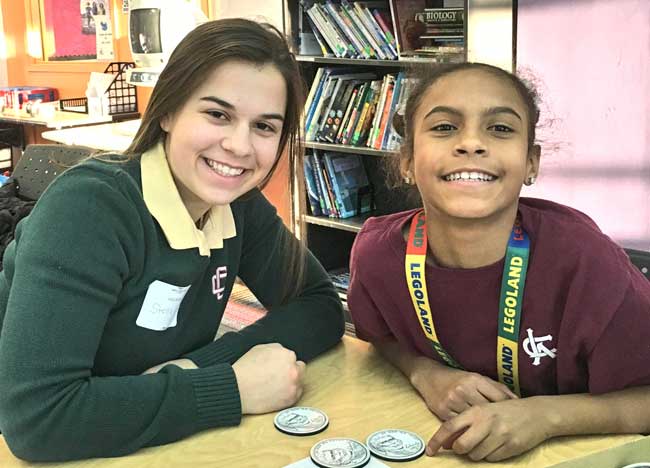 “Typically”, says Stella, "the staff at the Boys & Girls Club will match up our CCHS mentors with young children who are facing difficult challenges or circumstances. Mentors have to make a strong commitment to visit with their young mentee once or twice weekly to help with homework or tutoring, but also to just hang out, play games and talk about life.”
The weekly commitment can be a challenge for Central Catholic’s busy students.
“The goal of each mentor is to develop a relationship with a young child by doing small things that can have a large impact,” notes Stella, who has been accepted to Indiana University for next fall. She has been an encouraging mentor to a young girl, Mya, for three years.
“It’s been a challenge to coordinate this program, be a mentor myself, and balance my academic commitments, but what drives me and all of our Marist Mentors is knowing we, as high school students, can make a real difference in the life of a child.”
Elvin Rosa '21, now a freshman at Central Catholic, was mentored since 3rd grade by Anya Housianitis, a 2013 CCHS alumnus who is now a senior at Clemson University.
“My life was definitely changed for the better because of my mentor, Anya," says Elvin with deep gratitude. "Our relationship continues to this day. She is now my best friend. She is the reason I am a student at Central Catholic today. She taught me to be confident, strong, and determined.  Anya has taken me to Clemson to see what college is all about, even to several football games there, and I now see a world of opportunities I never knew were possible for me.”
Stella has worked to recruit 40 CCHS students this year as Marist Mentors for children at the Boys & Girls Club.  She is proud to point out that one of the newest Marist Mentors she recruited is Elvin Rosa himself.
“I’ve been so lucky to have a Marist Mentor in my life," says Elvin, "and now as a student at Central Catholic, I’m proud to say I am a Marist Mentor myself. I will certainly be there for my mentee and try my best to make a difference to them, as my Marist Mentor did for me.” 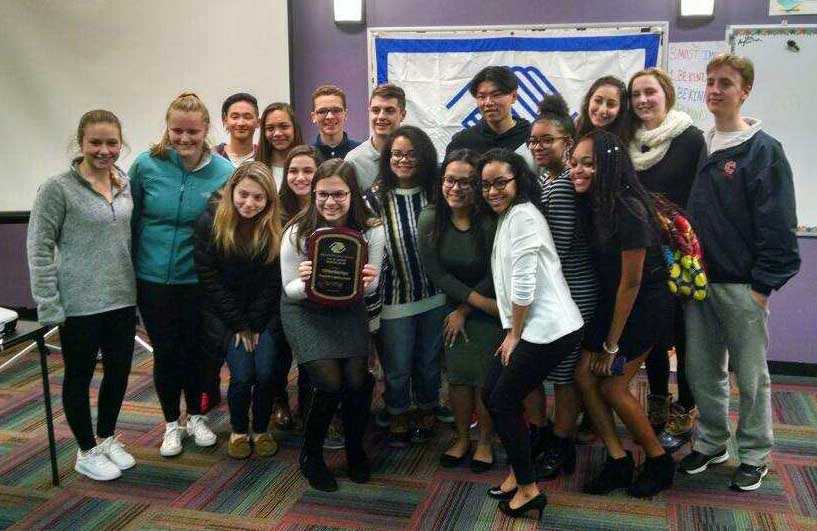 Thank you to Michelle, Anya, Stella, Elvin, and all of our Marist Mentors for answering the Marist call to service with such love and gratitude.

Founded by the Marist Brothers in the heart of Lawrence, Massachusetts in 1935, Central Catholic High School enrolls 1,200 students from over 60 cities and towns and several countries. Students come from diverse backgrounds to form a caring community of faith, learning, and service. They advance to college in overwhelming numbers (nearly 100%) and move on to successful careers and positions of leadership in government, business, industry, academia, and professions.

Central Catholic High School is fully accredited by the New England Association of Schools and Colleges.

Mission: Central Catholic High School makes Jesus known and loved.
We educate the whole person for college and for life, with particular care for the least favored and those in need.

Back To Home Page